“The Palace of the Lord God is so beautiful. Within it, there are gems, rubies, pearls and flawless diamonds. A fortress of gold surrounds this Source of Nectar. How can I climb up to the Fortress without a ladder?

By meditating on the Lord, through the Guru, I am blessed and exalted.

If it pleases Him, I bathe in the Pool of Truth, and become radiant and pure.”

The word “Guru” is a Sanskrit word meaning teacher, honoured person, religious person or saint. Sikhism though has a very specific definition of the word Guru. It means the descent of divine guidance to mankind provided through ten Enlightened Masters.

This honour of being called a Sikh Guru applies only to the ten Gurus who founded the religion starting with Guru Nanak Dev Ji in 1469 and ending with Guru Gobind Singh Ji in 1708; thereafter it refers to the Sikh Holy Scriptures the Guru Granth Sahib.

The divine spirit was passed from one Guru to the next as “The light of a lamp which lights another does not abate. Similarly a spiritual leader and his disciple become equal, Nanak says the truth.” Guru Nanak received a Hukam (commandment) from God instructing him to spread a message of truth based on devotion to One God, honesty, and compassion.

The soul of Guru Nanak passed on to nine successors, who elaborated on the first Guru’s teachings to give form to this new religion. The final form was given by the tenth and last Guru, Guru Gobind Singh Ji. Guru Gobind Singh Ji started the Sikh initiation ceremony: initiated Sikhs formed a community of saint-soldiers known as Khalsa, the Pure Ones. Guru Gobind Singh Ji also made it clear that, after him, the Guru-eternal for Sikhs would be their holy scripture, Sri Guru Granth Sahib Ji 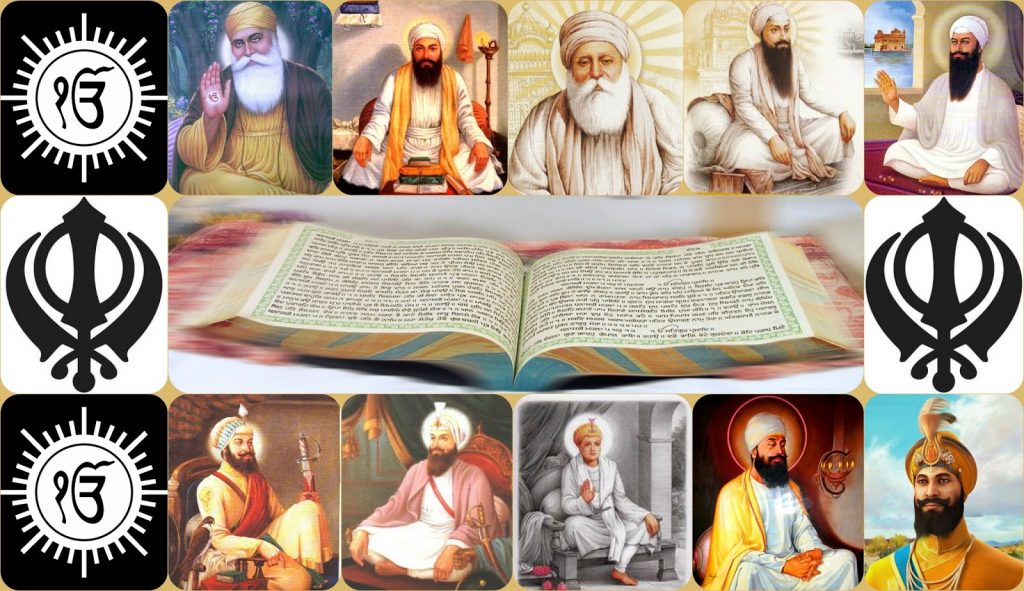