The Guru Granth Sahib is truely unique among the world’s great scriptures. It is considered the Supreme Spiritual Authority and Head of the Sikh religion, rather than any living person. It is also the only scripture of it’s kind which not only contains the works of it’s own religious founders but also writings of people from other faiths. The living Guru of the Sikhs, the book is held in great reverence by Sikhs and treated with the utmost respect. Sikhism rejects idol worship, so the Guru Granth Sahib is not worshipped as an idol, but rather emphasis is placed on respect of the book for the writings which appear within. Guru Granth Sahib is a collection of devotional hymns and poetry which proclaims God, lays stress on meditation on the True Guru (God), and lays down moral and ethical rules for development of the soul, spiritual salvation and unity. 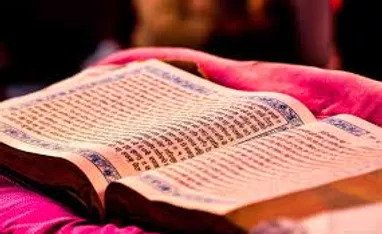 Guru Arjan the Fifth Sikh Guru compiled the original version of the Guru Granth Sahib. The Guru’s older brother Prithi Chand as well as others had started passing off some of his own compositions as the hymns of the Gurus. Guru Arjan realized that if this situation was allowed to continue it would be the undermining of the Sikh religion. The Sikhs needed an authentic compilation of the hymns of their Gurus. Thus Guru Arjan started collection the original verses of all the Gurus. He sent trusted Sikhs such as Bhai Piara, Bhai Gurdas and Baba Buddha across the country in search of original manuscripts. Guru Arjan made trips to Goindwal, Khadur and Kartarpur to visit the families of the previous Gurus. Guru Arjan collected original manuscripts of the Gurus from Mohan (son of Guru Amar Das), Datu (son of Guru Angad) as well as Sri Chand (son of Guru Nanak). Guru Arjan now pitched a tent by the side of Ramsar tank in Amritsar and started the arduous task of compiling the first edition of the Holy Guru Granth Sahib. Bhai Gurdas was entrusted as the Guru’s scribe for the master copy.

The monumental task was finally completed after a number of years. This original edition of the Guru Granth Sahib known at that time as Pothi Sahib was installed on a high pedestal within the Harmandir Sahib in August 1604. Guru Arjan seated himself at a lower level and instructed all Sikhs to bow before it, not as an idol, but as the book of divine inspiration which instructed living men in the ways of God and dedicated secular life. The revered Baba Buddha was appointed the first Granthi (custodian) of the book. Guru Arjan dictated that unlike the Hindu scriptures, the Pothi Sahib could be open to reading by anyone of any caste, creed or se​x.

There are also many contributions made by may Bhagatas.​